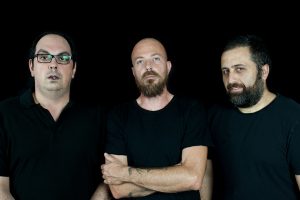 7C were founded in 2011 between Ortona and Lanciano, in the Abruzzo region (Italy), and was formed by Giuseppe Iubatti (double bass), Davide Di Virgilio (drums) and Claudio Carozza (analogic/digital noise). Since the beginning, this trio started to write tracks with free jazz influence as well as using machinery, tools, electronic devices and anything that could produce noise, frequencies and resonance as an instrument with free improvisation, while interacting with classical instruments like drums and double bass.

The band applied this idea over one year of practicing to produce first album in 2012 called “Discopatia”. The album is self-produced and includes five tracks, where world music, avant-garde and free jazz are mixed with analogic and digital noise. After a few months, the trio became a quartet, with Fabio della Cuna (saxophone and clarinet) joining the rest of the group.

In 2013, they released a new self-produced album called “Red Spider”. On this second work, they continued their search that started with “Discopatia”, going from symphonic tracks to the most delirious jazzcore, without omitting world and funk music.

At the end of 2015, 7C revolutionized their line-up: the rhythmic session (double bass and drum) remained the same, but Della Cuna and Carozza left and Tony “Death” Berardinucci (Otiòp, Hannibal ad Portas, Torquemeda) joined the group with his electric guitar.

De Ambula Records, an Italian independent label, got interested in the project and decided to produce the band’s new album, Compartment C, with the new trio.With the new sounds added by the eight chord electric guitar, the band moved towards avant-rock noise. Di Virgilio introduced his use of loopstation and synth in the new work considering them as the fourth element, since electronics plays a major role with the other instruments.